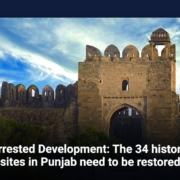 34 historical sites in the Punjab province have had problems with restoration and renovation projects because of things like a lack of building materials and rising construction costs. 19 of these projects had been approved in the past, and 15 new schemes were added in the last few years. All of them have been left to die off over time.

The secretary for tourism said that a list of major projects has been sent for re-approval.

At a total cost of Rs2821.858 million, Punjab Archeology approved 19 ongoing and 15 new projects this year, but not one of them has come close to being done yet. Most of the money that was released for most projects has to be given back. Sources who know about the situation say that more than 34% of the money has been spent on projects.

Documents from Punjab Archeology show that the 19 projects above also include the restoration and protection of Rohtas Fort, which will cost Rs218 million. Nandanafort is also being restored and preserved with a budget of Rs126 million, which is a lot of money. A five-year project to restore and protect Shalamar Bagh has been put on hold because of the lack of the rare red stone used to build it. The project will cost more than Rs290 million.

Read more with EL news : The Shahkam Chowk flyover in Lahore is expected to be delayed

According to Punjab archaeological officials, the Ministry of Commerce had given the go-ahead to import the red stone from India. However, because the dollar has changed a lot, the red stone importing contractors say they won’t do business at the prices they had agreed to. People were bidding on red stone when the dollar was worth less than Rs150. In the last few years, the border has been closed because of Corona; now the price of the dollar has risen sharply, and no contractor is willing to import stones from India, the contractor said.

On the other hand, the PHA is working to restore and protect part of the Dravar fort in South Punjab, while grass lawns are being made in the Jahangir and Shalamar Bagh mausoleums.

Almost half of the money, or Rs259.927 million, has been spent so far. The rest of the money has been given back.

As for the 15 projects that were done by Punjab Archaeology this year, Rs75 million was set aside for 12 different projects in Taxila, which is where they were. To do this, bids have been put out, but the work hasn’t begun yet.

Similar to this, construction is going on at the Mughal Garden in the city of Wah Cantt, the Mulut Temple in Chakwal, Sher Shah Bowli, Mianwali, Sheikh Ali Bin Hassan’s tomb, and deer enclosures in Hiran Minar.

Some work on Ali Mardan’s mausoleum in Lahore has been done, but the funds for more work have run out.

In addition, plans have been made for a museum in Harappa that will cost Rs81.88 million to build, and work is also being done to restore the Multan Museum.

Sources who know about these projects say that the Chief Minister is in charge of the Ministry of Archaeology and Tourism, and he has chosen his own advisers for these areas. “Advisers and secretaries have also changed over the past three years,” the source said.

Assadullah, the secretary of tourism and archaeology, said that there were two reasons why archaeological projects took so long to finish: the lack of red stone and the contractors’ new prices. It was a long time ago when the work order was made. The dollar rate was much lower then than it is now. It has now been prepared and sent for approval. If it is approved, work on the major projects will start soon. There are no problems with money, but it takes a long time and a lot of work to restore ancient sites. This gives the impression that work has stopped here or that there has been a slowdown in the work done there.