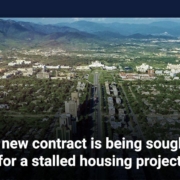 Asked about Kashmir Avenue Apartments in G-13, the minister said that when the contract was awarded, he had a lot of concerns about the lowest bid from the construction company.

He said that even though he told the prime minister to cancel the contract for the G-13 apartments, the contractor got the PM to go to the project site.

During that time, both of them signed a written agreement, but then the same thing happened again. Because the contractor was so powerful, I asked the prime minister’s permission to re-tender. The prime minister went to the project site without my permission, but the project was approved anyway, even though I didn’t know about it at first. Once again, I’ll talk to the prime minister about this, Cheema said, adding that work on a new project has been put on hold because of rising costs.

Read more with EL news : Renovating ancient sites of Peshawar will be a KP government project

Minister: When the construction of Kashmir Avenue Apartment in G-13 came up in the meeting, he said that the contract had been awarded at such a low rate that he was 100% sure that the project would not be finished. That’s what Cheema said. The contractor told us that he would not raise the price of the project later on.

Households Minister: Is there a rule about paying the contractor extra money for breaking the PPRA rules? If so, what does that mean for us?

He said that this kind of pampering can’t be done with public money. This is a project that will cost about Rs12-13 billion. I have also asked the prime minister to let this project be scrapped and re-bid, he said. It’s been done in accordance with the rules of the PPRA.