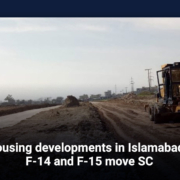 People who got government housing through the Membership Drive-ll in Islamabad’s F-14 and F-15 sectors on Wednesday went to the Supreme Court to fight a lower court’s decision that said the housing projects were not in the public good.

In the petition, filed through Hafiz Ahsaan Ahmad Khokhar Advocate, the petitioners, all government employees, said that the IHC judgement amounted to judicial overreach and “suffers from gross illegality” therefore, it was “liable to be set aside by Supreme Court”.

Read more with EL news : California has made Punjab its “sister state.”

The petition said that the Senate Committee on Housing and Works had said that the Capital Development Authority (CDA) should give Sector F-14 to the Federal Government Employees Housing Foundation (FGEHF) so that they could start working on a housing plan.

It also said that the CDA and the FGEHF agreed to start a housing project in Sector F-14, which is near the city centre. So, on January 6, 2015, the Housing and Works Secretary started writing a report about land acquisition in Sector F-14 and Sector F-15.

In the petition, it says that the prime minister approved the summary on May 1, 2015, and two notifications were made by the Islamabad Capital Territory (ICT) commissioner on May 20, 2015 and December 4, 2015.

The petition said that the Supreme Court also looked into the issue of land acquisition in sectors F-14 and F-15. The court ruled on many points, including the point that land acquisition for a housing project was a valid public purpose.

According to the petitioners, the high courts, as well as all other government bodies, have a constitutional and legal duty to follow and not to change the law points that the apex court has made. They said that when the IHC bench decided the case, they broke the law about when a case is over.

Another thing the petitioners said was that the high court could not get involved in the policy decisions of the government if it wasn’t specifically challenged by anyone in court on the grounds of mala fide or a violation of basic rights was brought up.