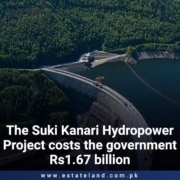 The government has yet to pay the landowners Rs1.67 billion for Suki Kanari Hydropower Project. The Mansehra district administration told the National Assembly’s Standing Committee on Planning, Development, and Special Initiatives that it had paid Rs2.03 billion to landowners acquired for the Suki Kanari Hydropower Project, which will generate 880 megawatts at Kunhar River in the Kaghan valley.

“I told the standing committee that the district government owes the landowners a total of Rs3.7 billion, but we have only paid Rs2.03 billion so far,” deputy commissioner Qasim Ali Khan told reporters on Tuesday.

Salah Mohammad Khan, a member of the National Assembly, presented the issues at the standing committee, chaired by MNA Junaid Akbar. The meeting was also attended by landowners and deputy commissioner Qasim Ali Khan.

According to the deputy commissioner, the chairman of the standing committee, Junaid Akbar, has formed a committee led by MNA Salah Mohammad Khan to deal with land compensation, the Mansehra-Naran-Jalkhad road, and other issues related to the Suki Kanari Hydropower Project, which is being carried out under the China-Pakistan Economic Corridor.

He said that local MNA Salah Mohammad Khan had addressed compensation for the dam’s acquisition of roughly 462 dwellings. The deputy commissioner stated, “The claim by the owners that they were not paid the compensation sum for their 460 houses is being evaluated, and a further probe based on information provided by claimants is proceeding.”

In response to a question from MNA Salah Mohammad Khan about the poor condition of the Mansehra-Naran-Jalkhad road, he said the National Highway Authority Chairman Khurram Aga said his department was working on a plan to rehabilitate the main artery that connects Khyber Pakhtunkhwa and Gilgit-Baltistan.