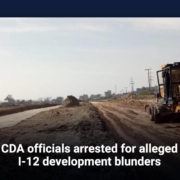 According to a source, the FIA filed a first information report (FIR) on Feb. 9 against the six officials and a contractor who worked for the CDA Human Resources Development Director.

The agency was given a fact-finding report by the complainant. It said that work on service roads East, West, and North was given to a contractor. After that, the file was given to the right person with the proposal for changing the work.

Report: After the letter of intent was sent, changes were made to the design without going through the proper steps and getting approvals.

Read more with EL news : The CDA plans to build a medical center in Sector I-9

Even before the contract was signed, changes were being made to the development work. This raised questions that needed to be looked into by the engineering wing and the contractor, adding that the first installment of the mobilization advance was released without proper approval, allegedly to benefit the contractor. Alleged I-12 development mistakes led to the arrest of two CDA officials.

It said that the variation order was made for payment without anyone agreeing to it or signing a contract.

According to the FIR, during the investigation, it was found that the director of sector development had recommended that a new culvert design be used for the four roads in question. This was never sent to the CDA’s design wing.

After that, the member engineering wing allegedly gave the design the go-ahead without getting permission from the design wing first.

Alleged I-12 development mistakes led to the arrest of two CDA officials.