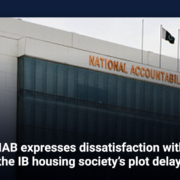 The NAB Welfare Cell and the Intelligence Bureau Employees Cooperative Housing Society (IBECHS) agreed on April 29 to transfer over plots to the former on October 31. The IBECHS later changed the deadline for handing over the plots to the NAB cell to December 31.

Following the meeting, NAB Additional Director Tariq Mehmood Bhatti issued a circular saying that the management of the housing society “informed that they are facing hurdles in timely procurement of land in Sector / Block P and AA allocated for NAB allottees,

No reaction from NAB spokesman Nawazish Ali Asim. Unknown to Dawn, the Welfare Cell coordinated for employees to buy plots from the IB housing association at market prices.

The Welfare Cell had requested the housing society to hasten development work and give over possession of the plots as the delay was causing doubt among bureau officials who had timely made the down payment and installments.

Given this, IBECHS is considering relocating Sector / Block P and AA to nearby Sector / Block G and AE of Gulberg Residencia Islamabad, where most of the leveled ground has already been purchased.

The IBECHS confirmed the relocation of plots for bureau officials in F-Executive and A-Executive sectors where the land price was considerably higher than Block P and AA. The minutes indicated that would enlarge an existing road linking the main IBECHS blocks to the new location. “The engineering design will begin on August 1 and be completed by October 31, 2021,” it claimed.

IBECHS stated in July that “the procurement of essential land for NAB allottees in Block A-Executive has virtually been completed”.

The meeting minutes noted that “obtaining some of the patches in that specific area” is difficult. The IBECHS extended the project deadline to December 31.

“The land bought for NAB allottees in Block F-Executive is located in Mouza Bhimber Tarar, which is entirely free from any claim of Jammu and Kashmir Housing Society or any other entity”, according to the IBECHS management committee.

It was claimed in the petition by IB deputy directors Ghulam Hussain and Amir Mujahid Khan, along with directors Nadeem Arif Chaudhry and Hafeezullah Khan, that the land in question was “disputed” and that “Jammu and Kashmir Cooperative Housing Society” filed a First Investigation Report on June 16, 2021, in Police Station Koral” against them.

A reporter called IBECHS Secretary Information Mohammad Ali for comment, and he answered but did not respond.