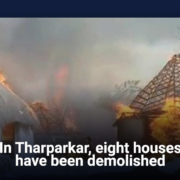 In Tharparkar, eight houses have been demolished. On Sunday, two fires destroyed at least eight houses and other buildings in the Tharparkar district. All of the people inside them lost their homes, grain stocks, and personal belongings.

One house caught fire in Jam Khan Jo Wandhio, a village near Nagarparkar, Pakistan. The fire quickly spread to two other places that were next to it. Dodo Khaskheli, a representative for the affected families, said that everything inside was burned to ashes.

In the other case, a fire destroyed five homes and other buildings in the village of Malanhor Veera near Mithi.

There was a fire in two villages, and people in both villages put it out independently. They said they were frustrated that they asked for help from the municipal committees, but no fire tenders were sent to the villages.