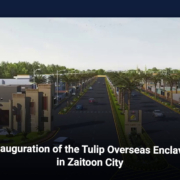 The Zaitoon Group, a well-known venture capitalist that has worked on projects like New Lahore City and Zaitoon City, held a launch event for its luxury Tulip Overseas Enclave, which is set to be built in Dubai. The Mughal Farmhouse near DHA Phase VIII was full of people from 7 p.m. to 10 p.m. on Wednesday for a fun launch event and music night.

Read more with EL news : Rs58 billion was earmarked for Phase-II of the Swat Motorway

People from Zaitoon City’s sales and marketing department, as well as the general secretary and CEO of the DHA Estate Agents Association, were there at the ceremony. In addition, Sohaib Jamal, Sohaib Jamal, Sarfraz Hamid Properties CEO Sarfraz Hussain, and Zaitoon City Project Head Sales Qasim Nadeem were also there.

The idea behind Tulip Overseas Enclaves was to make it easier for people to live in better places at a reasonable price. He says that the Zaitoon City project was already sold out before it was even announced. This shows the developer’s strength, honesty, and commitment to delivering on time.

People who own files for Tulip Overseas Enclave, he said, will be treated with the same speed and efficiency as the housing project’s successful launch, early balloting, and part delivery. After that, he said that the business plans to start more programs like this in Lahore soon, and then move on to other cities.