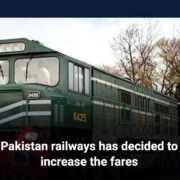 Pakistan railways are increasing their fares. As a result of the increase in the price of petroleum products, the Pakistan Railways (PR) has decided to raise the rates for all of its trains and the costs for packages and luggage.

Following the decision, prices for all passenger trains and destinations and parcel/luggage costs would be increased by 10% each starting on November 1, according to the decision. Additionally, freight rates will be rising by 5% with effect from November 5, according to notifications issued separately for the revenue categories. These fares allocation is assigned by concerned authorities.

For the benefit of all concerned, it has been announced that it will raise passenger fares for various trains with effect from November 1 until further notice. The announcement was made by the PR chief marketing manager’s office to inform and guide all parties involved. The increases in fares will effect the passengers. The Pakistan Railways (PR) has decided to raise the rates for all of its trains and the costs for packages and luggage.

“It is requested that the Director (IT) implement the 10% (class-wise) increase in passenger trains that are reserved in advance.” In addition, the Divisional Superintendents are asked to “install the fare table 2021, which will be in effect from November 1, at all stations and offices promptly,” according to the letter. Identical notices have been issued by the various sections of the Public Relations Department.

Read more with EL news : The IHC has directed the CDA to remove roadblocks on Malot Road

However, the cause for this notification being passed has not been provided at this point. People are dissatisfied with this decision because the increase in fares and inflation has a significant impact on their quality of life. Identical notices have been issued by the various sections of the Public Relations Department.