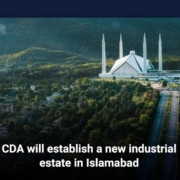 Amir Ali Ahmed, the CDA’s director-general, spoke with a team from the ICCI led by President Mohammad Shakeel Munir.

Mr. Ahmed stated that the Islamabad Dry Port Road would be dualized on Friday.

The team paid a visit to the CDA’s headquarters to address business-related concerns.

ICCI should provide a detailed proposal for a new project, according to the civic authority’s chairman.

Mr. Ahmed stated that the ICCI’s demand to establish a new industrial area in Islamabad was entirely acceptable.

He stated that the ICCI should create a thorough proposal for the new industrial estate and submit it to the CDA for consideration with the relevant government authorities.

Read more with EL news : The government is committed to growing the remittance-sending segment

The meeting agreed that the ICCI would meet with the CDA chairman again on November 15 to present the plan.

The CDA chairman admitted that the Kahuta Industrial Triangle had been ignored. Still, he stated that work on carpeting the industrial estate’s roadways had begun, assuring the delegation that the remaining issues would be remedied soon as well.

He stated that the process of soliciting bids for the development of parking plazas in marketplaces would begin shortly. He stated that the CDA would continue collaborating with the ICCI to develop industrial zones, markets, and the city.

The ICCI chief briefed the CDA chairman on critical issues confronting the business community and emphasised resolving them.

He stated that the CDA’s role was critical in resolving business community issues, and it was hoped that the civic agency would do so effectively. He stated that establishing a new industrial park would attract new investment, accelerate industrialization, and generate a large number of employees in the region.

He also addressed issues surrounding the lease renewal of industrial plots, stating that the ICCI would work closely with the CDA to resolve the matter.

He stated that the civic agency should allow for the subdivision of industrial plots to promote industrial activity.

Abdul Rauf Alam, a convener of the ICCI-CDA committee, stated that the business community was experiencing difficulties due to a shortage of parking spaces in marketplaces. The CDA should prioritize this issue. He stated that the remaining development work, including carpeting roadways in markets and industrial districts, should be completed shortly. CDA will establish a new industrial estate in Islamabad.

He stated that sewer pipes should be upgraded and sanitation should be further improved. He also urged proper measures to address the slum area’s concerns.