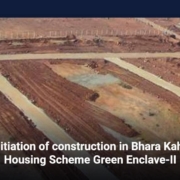 At the time, the minister said that getting affordable housing for government workers is one of the administration’s top priorities. He also said that the federal government will set limits on how many lawyers, journalists, members of Parliament, and regular people can live in each of these housing complexes. He pointed out that the federal government has given the go-ahead to a number of projects to help government workers buy homes. Later, Federal Government Employee Housing Authority (FGEHA) Director General (DG) Tariq Rashid told him about the Sky Gardens project. The DG said that the project will cover 6,000 kanals and that 70% of the jobs will go to government workers and 30% to the private sector. Also, about 530 kanals of land are set aside for green spaces, and schools, universities, and mosques have enough room to grow. Also, about 500 kanals of land will be used to build apartments.

In the last five years, the government has started a number of housing programm for government workers. Many of these projects are almost done and ready to be bought.