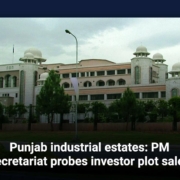 Punjab industrial estates: PM secretariat probes investor plot sales. PIEDMC is selling plots in several Special Economic Zones (SEZs) despite a moratorium, according to the Prime Minister’s Office.
The PM’s office has requested the Punjab Special Economic Zone Authority (SEZA) to verify the data and summary sheets by September 7, focusing on the PIEDMC’s provisional allotment letters, specifically the data and the authority’s capacity to grant such permissions.

The PM’s office advised the appropriate authorities not to sell industrial plots to any investor without getting the SEZ committee’s clearance. A BOI letter dated October 8, 2020, imposed a moratorium on the sale/lease/sub-lease of plots in all SEZs. All SEZs and zone developers were directed to immediately cease all sales, leases, sub-lease, etc.

A decision hold by the board of approvals in its 7th meeting presided over by the PM and notified to the SEZAs and developers by a BOI letter dated January 1, 2021, ended the moratorium.

“Despite the ban, the zone developer—PIEDMC—sold a large number of plots in Bhalwal, Vehari, and Rahim Yar Khan SEZs, as well as the former Quaid-e-Azam Apparel Park. According to Lt-Col retired Shakeel Ahmad Shah, Industrial and SEZ Manager (PM Office/BOI secretariat), the data relevant to these SEZs has been fully endorsed by the SEZA via its letter dated March 4, 2021.

The developer granted land assignment under the name QABP, which was not a notified SEZ at the time, then later after the Board of Directors approved a name change on October 7, 2020.

“We also learned that the PIEDMC is still allocating land without consulting the SEZ committees. Moreover, the record shows that no such case for award of additional land to the specified zone firm has been presented before the corresponding SEZ committee.”

In a letter dated August 30, 2021, the PM secretariat stated: For this reason, “the PIEDMC is requested to retract the minutes described above, as well as the ten letters above for granting zone enterprise status, being void abinitio.”

When contacted, a PIEDMC official denied the claim, calling it an attempt to undermine the PM’s efforts to recruit local and global investment. The moratorium is minor. The BOI is impeding the development of SEZs in Punjab. According to the law, rules, and regulations, we did not sell plots to investors. This act is anti-investor, he said. No SEZs built thus far have followed it.

According to the statute, it could have created no SEZs.