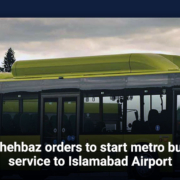 During his first day in office, Prime Minister Sharif was given a briefing on the metro bus project by officials from the CDA through his staff. The PML-N government launched the project in 2017.

CDA officials were told to start the bus service as soon as possible, preferably on Saturday. This is what they told the people who spoke to them.

Read more with EL news : Buildings can be built beside newly commercialized roadways

People who work for the government told Prime Minister Nawaz Sharif that 30 buses from China would arrive in Islamabad next month.

The CDA said that until 30 buses from China arrived, extra buses from the Metro service in Rawalpindi and Islamabad should be used to get people to and from work.

The sources said that the Metro service between Rawalpindi and Islamabad had extra buses that were parked in a depot right now.

PM Office: “Yes, today, the CDA gave us a briefing on the metro bus project, and the PM Office has told the city to start the service as soon as possible.”

Project: Officials said that the project was ready, but the civic agency was waiting for buses from China to come in before they could start.

The CDA asked the Pakistan National Shipping Corporation (PNSC) to help it get the buses from China to Pakistan as soon as possible so that the metro service could start.

Until recently, the contractor has been waiting for the buses in Shanghai to be taken to Karachi. They have been in a warehouse in Shanghai for a few weeks now.

Sources say that the buses were supposed to arrive in Islamabad on March 15, but because of Covid-19, they could not get there on time.

Afterwards, sources say it will take a couple of weeks for the bus to arrive in Karachi from China. After that, it could take another two weeks to get the buses from Karachi to Islamabad through customs and get them to the city.

The CDA chose Higer Bus Company after a competitive process. It had bid Rs728 million for the job.

In January 2017, work began on a 25.6-mile metro track that cost Rs16 billion. National Highway Authority (NHA) was in charge of the project. It was supposed to be done in August 2018. However, the project had to be put on hold, and its civil work was done last year.

The NHA was only in charge of building the corridor and other civil work. They had no say in how the buses worked.

Similarly, the Punjab Mass Transit Authority, which already runs the Metro Bus Service between Rawalpindi and Islamabad, said it didn’t want to run the service between Peshawar Mor and the airport. The CDA also noted that, as a development authority, it didn’t have anything to do with the bus service.

The NHA, the Punjab Mass Transit Authority, and the CDA didn’t want to work with the federal government. When the project was done, the government told the CDA to take over the project from the NHA in March last year. It should be noted that the corridors and stations of the metro track have already been built, but the command and control, ticketing, station management, cleanliness, and security systems have not yet been put in place. The CDA has opened bids for a contract to install these systems.