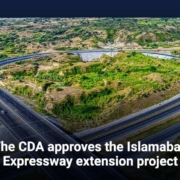 Reports say that the decision to extend the work was made at a meeting of the CDA board that was led by CDA Chairman Amir Ali Ahmad. According to Project Concept-1 (PC-1), FWO would be in charge of expanding the Islamabad Expressway from PWD to T-Chowk. The two-lane road will be turned into a five-lane road, and in the future, it could be made into a six-lane road. Rule 42 of the Public Procurement Regulatory Authority (PPRA) says that the government gave the contract for the project to FWO (f). Because the location or project is sensitive, the rule lets the government only give contracts to companies that are owned by the government.

The Blue Line Bus Rapid Transit (BRT) project between Koral and the Pakistan Institute of Medical Sciences will also be built as part of the project (PIMS). The following decision was also made at the meeting: The Green Line BRT project from Bhara Kahu to PIMS is being looked at. Review of how the Shah Allah Ditta bypass is coming along Getting things set up at the Orange Line Metro Station Review of the progress made on the 2,000-apartment FWO project Nelore Heights, which is open to the public. The CDA approves the Islamabad Expressway extension project