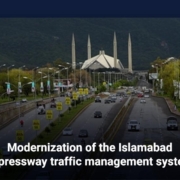 A merging point has been put in place so that some traffic can be moved over to the other side of the Expressway during rush hour. Following the facts, traffic on two lanes of the Islamabad Expressway will be moved from Koral Chowk to Zero Point. The CDA and the Islamabad Traffic Police will help move the traffic from Koral Chowk to Zero Point (ITP). This means that during peak hours, commuters will be able to use six lanes.

This group is working on two places where people will be able to get together. One is near a painting of Quaid-e-Azam and another is near the I-8 bridge before Zero Point. It was revealed that the CDA would build the merging points, and ITP would be in charge of the traffic.

Read more with EL news : A Board of Urban Regeneration will be established in several cities

In an experiment, traffic will be moved to either side of the road for a week. This will be done with the amount of traffic in mind. More information was given by a senior official from the CDA, who said that enough traffic officers would be on the road and that 2,000 cones would be used to divide the lanes.