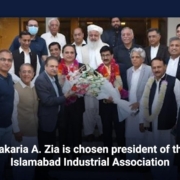 The group only represents the business owners of nearby industrial estates like the Islamabad Capital Area and the Kahuta Industrial Triangle. Working hard to meet the needs of the Islamabad Industrial Association, led by outgoing President Tariq, has played a big part in making Islamabad known as an industrial city. It’s important to note that the Islamabad industry is now one of Pakistan’s most important.

Read more with EL news : To protect citizens from fraud, the LDA will register property dealers

He said that security, tax issues, corporate social responsibility (CSR), and improving the well-being of people who work in the industry were all important things to think about. It was also important to portray the business in a good light.