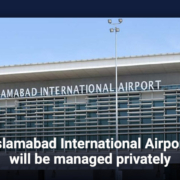 News sources said on September 26 that the Civil Aviation Authority (CAA) has decided to hire a private company to run and take care of Islamabad International Airport.

The decision was made because there had been a shortage of 100 workers for the past two years. The authorities were asked to fix the labour shortage, which was causing health problems. After the decision is made, the IIA will start the formal process of hiring a company to do the cleaning and maintenance work. The company will be in charge of its own staff, and their contracts will be renewed regularly if they do a good job. Since there have been no new hires and the policy has changed to let passengers bring visitors, problems with cleanliness have started to show up. It is thought that hiring a maintenance company will solve the problem.

Read more with EL news: This year, Rawalpindi’s infrastructure projects will be initiated

IIA is one of the most recent airports built to international standards. It cost PKR 105 billion to build and opened in 2018. Because of problems with building and upkeep, the airport has had a lot of administrative problems. But the aviation ministry recently told the airport’s management to fix the problems and get the airport back to its best performance level.