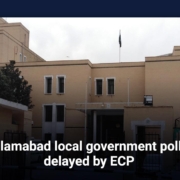 Nisar Ahmed Durrani and Shah Mohammad Jatoi presided over the bench. They heard statements from the interior secretary, chief commissioner, and deputy commissioner. They addressingthe government’s preparations for local government elections in the capital.

During the hearing, ECP Special Secretary Zafar Iqbal informed the bench that local government elections ended on February 14. The ECP has 120 days to poll. He stated that the ECP had written multiple letters to the interior secretary and chief commissioner expressing their concerns.

Interior Secretary Yousuf Nasim Khokhar said he informed the ECP of plans to hold local council elections in Islamabad. The federal government was drafting a new Local Government Act to give the new system greater authority.

The Ministry of Law and Justice is in charge of evaluating a draught act.

The law ministry will study the draught bill before presenting it to the Cabinet Committee on Legislative Cases (CCLC).

It is pertinent to note here that ECP had invited the interior secretary and chief commissioner for the said hearing in connection with the delay in providing required information and enactment of local government law in advance of the impending local government elections.

AS MENTIONED EARLIER, the ECP had directed the officers to appear before the commission via separate letters (dated Sept 27). On August 5, the ECP Secretariat met, with the interior secretary and top commissioner among others.

According to the ECP’s letter, “during the meeting as mentioned previously, on the assurance of the federal government for taking necessary steps/making arrangements, namely the establishment of union councils with an average population of 20,000 per union council and the requisite legislation/enactment of a new Local Government Act with the approval of the federal cabinet, a period of on.

The election commissioner instructed the chief commissioner to provide required materials (including maps and data) for local government constituency delimitation, but he did not.

The letter emphasized that constituency delimitation is a necessary first step and a component of organizing and conducting elections reasonably and equitably, according to sections 17 and 221 of the Elections Act, 2017.