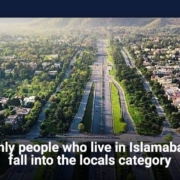 ISLAMABAD: The Establishment Division has told the Capital Development Authority (CDA) that only people who live in Islamabad are considered “locals.” This means that the CDA can now hire more than 900 people to work in sanitation.

Sources in the CDA said that the process stopped in the same month because politicians from the city of Rawalpindi didn’t like the idea of giving the jobs only to people who lived in Islamabad.

The government organization couldn’t move forward with the hiring process, so it sent a letter to the Establishment Division asking for help with the word “local.” The division has now told the city government that a local is only someone who lives in Islamabad.

“Yes, the confusion has been cleared up by Establishment Division. “They told us that “local” only applies to people who live in Islamabad,” said CDA spokesperson Syed Asif Raza on Monday.

He said that the CDA would soon finish the recruiting process.

Last year, the CDA asked for applications for the jobs of sanitation workers and interviewed those who were chosen, but it did not send out letters of appointment.

Sources say that the jobs were for locals, and the CDA also said in an ad that ran in national newspapers on November 5 that only “locals” could apply for the 950 jobs as sanitation workers and the 16 jobs as truck loaders.

But they said that political leaders from Rawalpindi had said that people from the garrison city should get a share of the jobs because they were from the area.

On the other hand, the CDA decided in July of last year to stop hiring private sanitation workers and start hiring full-time workers.

The management of the CDA also decided that renting equipment should stop and that the authority should buy its own equipment.

Under the terms of the project, which was worth Rs650 million per year, the contractor was responsible for keeping the area clean and picking up trash. It used its equipment and put 1,200 sanitation workers to work.

After the contract was cancelled, the CDA gave a new contract for Rs510 million to hire machinery for only one year in July last year. At the same time, the CDA paid the salaries of private sanitation workers.