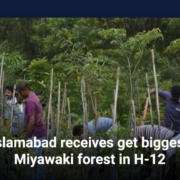 On October 5, news sources said that the largest Miyawaki forest in Islamabad is being built in Sector H-12 by the Capital Development Authority (CDA) and Mari Petroleum Company Limited (MPCL).

Read more with EL news: Setting a deadline to connect the Thar coal mines to the railroad network

On 17 acres of land, 20,000 large seedlings of different species have been planted to make the Miyawaki forest. Soon, more saplings will be planted. The Miyawaki forest was opened by CDA Chairman Usman Younis and Managing Director of Mari Petroleum Faheem Haider. At the time, the chairman said that the forest would add a lot to Islamabad’s scenery and make the city’s ecosystem better, which would make it healthier. He said that the woodland is the biggest in the city and that it needed new and better security systems. He went on to say that the plan is a big step toward making the country’s environment better and healthier.

It’s important to remember that the government started the Miyawaki Forest Project in 2020, with plans to do so in every major city. The project is meant to stop pollution from getting worse and climate change from making things worse in the long run.