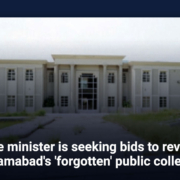 The minister is seeking bids to revive Islamabad’s ‘forgotten’ college. On Thursday, the government said that the ‘forgotten’ public college in Islamabad, which has been closed for more than 32 years, would reopen as soon as feasible.

Federal Education Minister Shafqat Mahmood urged ministry officials and the director-general of the Federal Directorate of Education (FDE) to finalize credible alternatives within a week during a meeting convened to discuss the problem.

The minister presided over a meeting to examine the Mera Bagwal Technical College’s single-point agenda and asked ministry employees and the FDE director-general to finalize ideas for the type of education delivered at the college.

Following the discussion, the minister told Dawn: “We have resolved to make this college operational as soon as feasible.” Today, we explored numerous choices, including whether to establish a degree college or a university. Finally, I commanded that viable ideas be finalized.”

According to the college’s website, it will open soon.

The minister stated unequivocally that he will use the facility for educational purposes and that his ministry has been aggressively pushing the case. He added that the Ghulam Isaq Khan Institute (GIKI) had expressed interest in the structure, and there had been conversations about establishing a degree institution on the property.

The minister stated that he would convene another meeting next week to address this long-standing issue.

“Today’s discussion was extremely encouraging, as the education minister has shown a genuine interest in this idea, and we will meet again in a week to finalize details,” he stated.

The college is located in the Mera Bagwal neighborhood of Bhara Kahu. The building has had only one change in the last 32 years, and that was its reconstruction in 2013-14 by a public sector university.

Recently, the local MNA wrote to Minister Mahmood urging that classes resume at the college.

The letter, dated Sept. 9, and obtained by Dawn, stated: “Your attention is invited to the rehabilitation of the Mera Begwal building, which was constructed to provide technical education to the community, but the facility has remained abandoned, and the people’s aspirations have been dashed.” The government said that the ‘forgotten’ public college in Islamabad, which has been closed for more than 32 years, would reopen as soon as feasible.

The statement conducted a meeting on August 31 to discuss the matter at the community’s request. The meeting resolved to open the building as a degree and technical college for males. The FDE would be responsible for providing instructional and support staff, equipment, and minor building repairs and maintenance.

“Because the community gave 232 kanals of land, would use the additional property to provide health services to the community. The government said that the ‘forgotten’ public college in Islamabad, which has been closed for more than 32 years, would reopen as soon as feasible.

According to the letter, regular classes at the college will begin in March and August 2022.