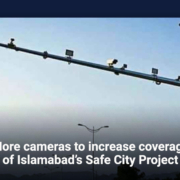 In order to make Islamabad “one of the safest cities in Pakistan,” the federal government is excited to add more cameras to the city so that the Safe City Project can cover all of it, up from 30 percent now.

At a press conference, Interior Minister Rana Sanaullah said that the safe city project currently covers at least 30% of Islamabad, but that soon, when more cameras are installed, the project will cover the whole capital.

The minister said that more cameras would be put up in “all the important places.” He also said that Rs40 million had been given to the Safe City Authority right away to help it meet its immediate needs.

According to the PML-N leader, the chief of police in Islamabad and the head of the Safe City Authority have been told to make a report on whether or not the project can be expanded.

The minister said that once the feasibility report was done, money would be sent to the project within a week.

“Since the Safe City Project started many years ago, Islamabad has grown quickly in size and population,” the project’s leaders said. They also said that 1,905 cameras had already been set up in different parts of the capital.

Also, the project started out by helping the police find and identify criminals when the operation division and investigation wing asked for help.

But its role has changed now that its employees have been told to help the Islamabad police cut down on crime.

The interior minister also said that the government would do everything it could to end “police culture” in Islamabad and put cameras in police stations to make sure that the police are accountable. “No one would be allowed to use torture in police stations, and it would not be tolerated,” he said.