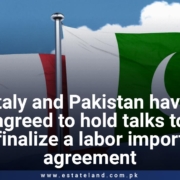 Jauhar Saleem, Pakistan’s ambassador to Italy, announced that they have agreed to hold talks to finalize on a labor import agreement between Italy and Pakistan had begun. Intending to create greater chances for local trained young to find work in the Italian labor market.

The current strong economic and trade ties between the two countries will help to foster such a potential labor import agreement, which will bring the two countries closer together, the ambassador said while speaking to the media during the third phase of a series of digital zoom link media talks organized by the Pakistani embassy in the United States.

According to the ambassador, the Pakistani embassy in Rome is now striving to provide legal support to Pakistani migrants, and the Italy-Pakistan ‘Workforce Export Agreement’ is one such link for developing chances for local skilled labor in the prospective Italian market.

He also highlighted the initiatives to increase tourism, particularly the capacity-building of Pakistani tourism stakeholders by Italian experts. This agreement will serve the best in interest of Italy and Pakistan as they have agreed to hold talks to finalize a labor import agreement.