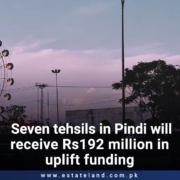 Seven tehsils in Pindi will receive Rs192 million in uplift funding. Justice Athar Minallah, the Chief Justice of the IHC, suspended the assignment of plots to the capital’s judiciary in sectors F-14 and F-15 on Friday, claiming that the award of land was an apparent conflict of interest.

The court also sent a notice to the attorney general, requesting an explanation from the Ministry of Housing and Works about the policy of allocating plots to a select group of people. The case will be heard on September 13 by a larger bench.

It should note that the Federal Government Employees Housing Authority (FGEHA) allotted plots to Chief Justice of Pakistan Gulzar Ahmed and other judges of the superior judiciary, as well as bureaucrats such as Dr. Shahzad Arbab and Dr. Waqar Masood Khan, after retiring from government service were hired as special assistants to the prime minister, during the balloting.

”Federal Government Employees Housing Authority recently held a poll for assignment of plots in F-14 and F-15,” Justice Minallah said during the case’s hearing. Almost every judicial officer of the district courts of Islamabad, who is meant to resolve and rule on the claims and rights of the affected land owners, is a benefactor, accordilandownersist.”

“It raises serious questions about conflict of interest because the plots are given to the beneficiaries at substantially lower prices than current market rates, and thus each beneficiary has a financial interest,” he said, adding that “amazingly, the list also includes those judicial officers who have been dismissed based on misconduct or corruption.”

Justice Minallah pointed out that one of the beneficiaries was a judicial officer who was convicted and sentenced by this court and whose conviction was later supported by the august Supreme Court in the case of a kid named Tayyaba. Similarly, the IHC chief justice noted that “the judicial official who was discharged on corruption accusations in the fraudulent degree [Axact] case is also an allottee.”

According to the FGEHA’s records, three sacked additional district and sessions judges — Pervaizul Qadir Memon, Raja Khurram Ali Khan, and Jahangir Awan — were each awarded a kanal plot in F-14 and F-15, while two former civil judges, Adnan Jamali and Amir Khalil, were each given 14 marla plots.

Mr Memon was fired from his job in February 2018 after accepting a bribe to acquit MS Axact Shoaib Sheikh, the company’s CEO. In the Tayyaba torture case, Raja Khurram Ali Khan was convicted and discharged from the army. At the same time, Jahangir Awan was fired last year for firing in the air during a brawl on Constitution Avenue. The IHC management also fired civil judges Jamali and Khalil.

According to the court’s ruling, the names of judicial personnel under investigation for apparent incompetence are also among the beneficiaries. How could the government reward a public servant who had been fired for corruption or misbehavior, Justice Minallah wondered.

While the judges of the IHC turned down the FGEHA’s offer of plots, the judges of the lower courts made applications, and the authority assigned plots to each judge during balloting on August 17, 2021. The FGEHA, interestingly, allocated plots to IHC officials whose appointments had been declared unlawful by the Supreme Court.

The IHC and the district courts in Islamabad were flooded with lawsuits against the FGEHA, according to Justice Minallah. Almost every judicial officer in the district judiciary has a considerable financial interest in the authority. Citing a Supreme Court decision in the matter of Anwar and others v. The Crown [PLD 1955 FC 185] said that “no judge can be a judge in his suit.”

Justice Minallah cited another case, ‘Federation of Pakistan v. Muhammad Akram Shaikh, etc.,’ in which the Supreme Court stated that “when a judge’s pecuniary or financial interest, no matter how small, is likely to be affected as a direct result of the decision, in any case, he is ipso facto, disqualified from hearing it…”

“It is evident that judicial officers’ pecuniary interests are created when he or she, as the case may be, becomes a beneficiary of the extraordinary benefit of receiving state land at prices much lower than market rates,” the IHC chief judge stated. The impression of a dispute of interest is enough to undermine plaintiffs’ faith in the legal system.”

“It commenced registration under membership drive Phase-II on ‘age-wise seniority basis’ for federal government employees and other designated groups in April 2015 as per authorized quota policy and eligibility requirements of the scheme,” the FGEHA said in response to a news item published earlier.

Until May 2016, nearly 80,000 members were registered, including government employees from BS-1 to BS-22 and superior and lower court judges, according to the FGEHA. In addition, allottees whose names were included in the balloting of plots for sectors F-14/15 were issued consent letters in 2016, even though the balloting was only to assign them plot numbers.

The housing authority stated that all allotments were made following the FGEHA’s approved criteria/policy. Further, that balloting for allocating plot numbers to bona fide allottees was performed utilizing a transparent computerized balloting system.

Read more with EL news : The LDA council has approved a budget of Rs63 billion