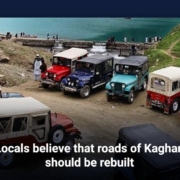 Locals believe that Kaghan’s roads should be rebuilt. Residents of the Naran area in Kaghan valley aired their issues during an open kutcheri on Monday, according to news sources, and requested the appropriate authorities to resolve their concerns as soon as possible. They requested that the roads be restored as quickly as possible and that the Kaghan Development Authority’s offices be relocated from Mansehra to Balakot, where they currently reside.

On hand for the occasion, which was arranged by the district government, were MPA Ahmad Hussain Shah, Special Assistant to the Chief Minister on Population Dr. Qasim Ali Khan, KDA Chairman Aimal Zaman, and other senior officials from the area.

In an interview with the Jeep Drivers Association, Mohammad Sabir revealed that the lake Saiful Muluk Road was in poor shape. The province government received considerable sums of toll revenue at two locations, according to He, but neither the KDA nor the Department of Communication and Works claimed ownership of the route, which was a source of contention.

Mr. Sabir went on to say that rubbish had accumulated everywhere, including alongside the lake, as a result of the neglect of the responsible authorities. He asserted that garbage constituted a health concern to the environment’s water supply.

It was brought to the attention of the community by residents Mohammad Riaz and Mohammad Waheed, Naveed Khalil, and Mohammad Rustom who expressed their discontent with the absence of drinkable water, power outages, and graves in the area, among other things. During the meeting, Mr. Riaz expressed his dissatisfaction with the illegal occupation of the evacuee department’s land in the Naran area. DC Dr. Qasim promised that the issues of the people would be resolved as swiftly and effectively as possible.