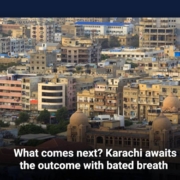 A WEEK AFTER THE FIRE, stink, and misery permeated the atmosphere as one visited the Karachi Saddar Cooperative Market. Workers were busy removing the remnants of burned businesses while owners filled out damage assessment paperwork. Within hours, the leaping flames extinguished life in over 400 businesses.

The source of the fire and the reasons for the relatively large extent of destruction, despite the presence of many fire stations nearby, are still unknown. Unless the government intervenes to restore some form of life to the severely devastated market, the impacted traders face a grim future.

“Several government officials, including the municipal administrator, paid brief visits and vowed to advocate on our behalf to higher-ups. We have received no commitment from the government on rebuilding or compensation thus far.

Some marketgoers suspected sabotage orchestrated by those involved in the purportedly unlawful sale/purchase of shops in the building. “I was here when the fire began to spread. It did not appear to be an accident at all,” emphasised one irate shopkeeper on the spot.

Sudden fires in the business district, an increase in street violence, and specific wall graffiti are complicating life in a metropolis that provides 40% of national and 90% of provincial resources.

Independent city observers believe the occurrence and the provincial government’s response are indicative of the city’s neglect. “I’m afraid of the city’s position. This could be the result of my paranoia. The unexpected increase in street violence, fire occurrences in commercial centres, and nocturnal wall-chalkings all indicate to the reactivation of some secret forces,” one observer speculated.

The Sindh chief minister’s office was contacted, but no answer was received prior to the filing of this storey.

Murtaza Wahab, the city administrator, denied any notion of administrative neglect in the case of the fire catastrophe or in general. He stated that he would like to wait for the report of the inquiry before making any additional comments. He regretted the market’s lack of fire safety equipment, which may have aided dealers in taking action before to the arrival of fire engines. He stated that eight fire tenders were involved in the operation when he was in charge. “Because the KPT fire station is not under our jurisdiction, I am not answerable if it is not mobilised.”

In general, he claimed the provincial government might have done more to alleviate the agony caused by the lack of water, but pointed the finger squarely at the federal government for the lack of public transportation in the country’s commercial capital.

“China agreed to finance the Karachi Circular Railway as part of the China Pakistan Economic Corridor in 2016, but the federal government refused to provide a sovereign guarantee to Chinese investors. I am confident that the situation will improve significantly over the next two years, as various projects in the sector are progressing at a decent rate,” Mr Wahab stated over the phone.

He believed the corporate sector’s expectations should have been greater, but ‘hostile’ is an overstatement for the provincial government’s relationship with the business community, which he emphasised included the community as a significant participant.

When asked why the business community in Karachi behaves differently than those in Sialkot despite their greater financial strength, he believed the question should be aimed at the private sector, not the government. All he could do was offer to share the data he used to improve Karachi’s governance standards.

“Despite its contribution to the national coffers, Karachi lags behind its global peers in terms of basic civic facilities such as water and public transportation, and performs significantly worse than several smaller cities inside the country,” he said.

According to some estimates, Karachi’s portion of overall tax collection exceeds 40% of the national total. The cosmopolitan city contributes more than 90% of the revenue generated by the Sindh Board of Revenue in the province. According to released Federal Board of Revenue (FBR) figures, the city contributed Rs209 billion in income tax in 2018, compared to Rs180 billion in Lahore.

Another senior member of the provincial team pledged to profile all districts of Karachi with current data “soon.”

Asad Ali Shah, the CEO of an accounting firm and the son of former chief minister Qaim Ali Shah, believed Karachi needed greater attention and better governance if the party wanted to enhance its image in the city. Clearly not a fan of Murtaza Wahab, he conceded that Karachi’s governance is far from good.

He recalled when the PPP used to have a little more fun in Karachi. “In the 1970 elections, the party captured 20% of provincial seats and two of Karachi’s seven National Assembly seats. Karachi was well-represented in the first PPP government. Kamal Azfar was finance minister, while Haji Kassim Abbas Patel was in charge of industry. Begum Raana Liaqat Ali was appointed governor of the province in 1973 and was succeeded by Mohammed Dilawar Khanji.”

He criticised the MQM for escalating the rural-urban split and eradicating the PPP from typical Karachi neighbourhoods. He was critical of the government’s deteriorating relationship with business. According to him, the health sector performed better than other sectors. “By freely investing in SIUT, NICVD, Jinnah Hospital, Trauma Center, and Indus Hospital, the government has benefited the city.