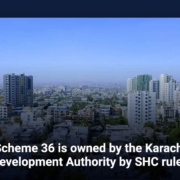 People in Karachi will start using the Karachi yellow line BRT project thanks to a grant.

The court told the government to ensure that Scheme 36 was not being interfered with by Goths or having bad property claims against it. The two judges who decided were Judge Irfan Saadat Khan and Judge Muhammad Faisal Kamal Alam. They made the decision.

As part of this, a bench told authorities to get back the recreational facilities in Scheme 36, Block 10, Gulistan Jauhar. They also told the KDA not to let them be used. As a side note, it was said that in the past, the rules said that Scheme 36 owns all land KDA.

The date for the DHA Multan property expo in 2021 has been made public in Karachi.

These statements were made when petitions were processed on benches in 2014 and 2016. State authorities and people tried to make false claims about the property in question, so these statements were made. PKR 100,000: The second petitioner was fined by the court for filing multiple legal disputes about the same thing that the judicial proceedings had already decided about, which is why the court did this. The judge told the SHC registrar to write up a report on stopping the “frivolous” lawsuits in four weeks.