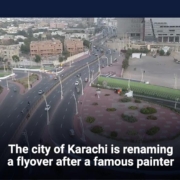 The city of Karachi is renaming a flyover after a famous painter. News sources said that on Thursday (May 26), the city government of Karachi changed the name of a flyover to honour the Pakistani painter Eqbal Mehdi. The painter’s name will be given to the bridge that goes from the central district to the east.

Barrister Murtaza Wahab, who is in charge of Karachi, was quoted as saying that the decision to rename the flyover was made to honor the painter’s contribution to his passion and to creating a positive image of Pakistan on an international level. He said the flyover would be open to the public once it had been completely fixed.