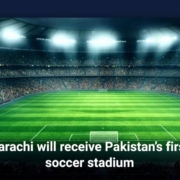 German engineers developed the country’s first-of-its-kind soccer stadium in order to kick-start a series of football infrastructure projects. According to reports, the stadium would provide FIFA international-standard playing conditions and an unforgettable experience for both players and fans. Additionally, it will open up new marketing and technology potential for firms.

Additionally, Michael Owen, a former English footballer and current Ambassador for the Pakistan Football League, asserted that this investment will be essential in the growth of football and will pave the way for international opportunities. According to rumors, football player Owen will host a complete press conference at the end of the month to unveil the city’s first soccer stadium. The press briefing will feature the stadium’s first photographs and 3D virtual tour.