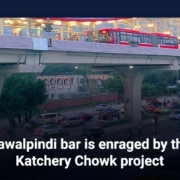 Rawalpindi bar is enraged by the Katchery Chowk project. The District Bar Association in Rawalpindi has said that if about 100 lawyers’ chambers are demolished during the construction of a double-decker, state-of-the-art Katchery Chowk underpass project, they will get a stay of the project.

The district bar association hasn’t been told about the project by the right person. The District Bar Association Rawalpindi Secretary Malik Mubashir Rafaq said, “We will not allow the demolition of a single lawyer’s office.”

“We are not against this project,” he said. “How could the authorities include a large part of the lawyers’ chambers and courts in the project without taking them into account?”

Read more with EL news : A new contract is being sought for a stalled housing project

“The district bar’s objections should be quickly removed by the right person.” He said that if the right people wanted to get more space by tearing down the lawyers’ chambers, they should pay the lawyers and find them new places at the market rate.

People who show up to lay the foundation stone of a project or try to bring down the lawyers’ offices will be responsible for their own profit and loss if they don’t have it.

The project, which costs Rs3.80 billion, will be done in a modern way with new architecture, modern European and Chinese technology.

Last week of March is a good time to start work on a new project.

Sources say that this week, representatives from the bar and the Rawalpindi Development Authority will meet to talk about the issue.