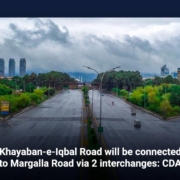 The CDA’s engineering wing would create the interchanges at Shaheen Chowk and E-11 Chowk, according to details. The CDA board of directors will discuss finalising the consultant firm during a planned meeting.

According to reports, Khayaban-e-Iqbal is one of Islamabad’s busiest roads due to the proximity of government offices and educational institutions to Shaheen Chowk. On the other side, the road is congested as a result of the construction of apartment buildings and wedding marquees in E-11.

According to CDA authorities, once Margalla Road is completed (from G.T. Road to Sangjani), it would attract increased traffic, which is why these interchanges are critical. Additionally, officials stated that work on Margalla Road is now ongoing and is expected to be completed during the current fiscal year.

It is worth noting that Prime Minister Imran Khan laid the foundation stone for the Margalla Avenue development project in April of this year. The CDA’s project was divided into three sections.