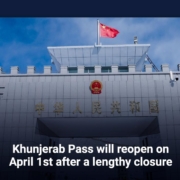 Khunjerab Pass, a major trade route between Pakistan and China, will reopen for business on April 1. It was closed nearly two years ago to contain the coronavirus pandemic.

From May to November, China Economic Net (CEN) says the border pass between the two countries is usually open for trade and tourism.

Read more with EL news : MoUs for investment in KP tourism zones has been signed

A Pakistan official said that the Chinese government sent a letter to Pakistan about reopening the border pass in line with the agreement the two countries signed in May 2013.

The official said that the Chinese government had said in a letter that steps would be taken to stop the virus from spreading through Khunjerab Pass.

Port authorities on the Chinese side of the world’s highest-paved international crossing have been told to take all possible preventions against the Covid-19 virus before goods from Pakistan arrive.

Pakistan’s border guards have also been told to do everything they can to keep the highly contagious virus from spreading.

It’s worth noting that the Khunjerab Pass will be open from July 29, 2020, to August 10, 2020, so that containers filled with goods can move through.