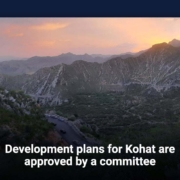 Development plans for Kohat are approved by a committee. The leading newspaper reported on June 2 that Ziaullah Bangash, in charge of the District Development Advisory Committee (DDAC), has approved PKR 60 million worth of development projects for Kohat.

At the office of Deputy Commissioner Roshan Mehsud, DDAC Bangash led a review meeting. During the meeting, the heads of the departments told the DDAC about the development projects that were still going on. The DDAC told the right people to move faster on the projects so they could be finished on time. The DDAC Bangash also said that work will begin on Khawaja Abad, Chargbagh, Ambar Banda, Marai, Hospital, and Junglekhel after Kacahi Road is finished.

Earlier, the government of Khyber Pakhtunkhwa (KP) gave PKR 200 million to fix up and build new roads in the PK-82 constituency. In addition, Arshad Ayub Khan Orakzai, the Provincial Minister of Irrigation, said that a cadet college will be built in the Orakzai district so that people can get a good education.