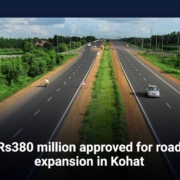 Rs380 million approved for road expansion in Kohat. After a two-decade wait, the provincial government has finally sanctioned Rs380 million to develop the road between Kutcheri Chowk and PAF Square, following an agreement with the army on barracks demolition.

The widening of the congested route would assist in alleviating traffic congestion in Kohat.

Mansoor Khan, the public relations officer for Shehryar Afridi, the chairman of the parliamentary committee on Kashmir, told Dawn Saturday that they would finish the project in three parts. He also stated that they would develop good parking spots to enable a smooth traffic flow in the congested area.

Arab Jan, deputy chief warden, told Dawn that the busiest road was only approximately 15 to 18 feet wide at times, resulting in traffic congestion. According to him, vehicles waited for more than a half-hour to travel a one-kilometer stretch of road owing to gridlocks, despite the deployment of wardens at several locations. Rs380 million has been sanctioned for the expansion of a road in Kohat.

The traffic warden stated that three years ago, the communication and works department designated markets and stores to be pushed back several feet at various spots to accommodate road expansion.

The project’s clearance had been delayed due to a disagreement between the government and the army over the expense of the barracks placed on the left side of the road between Martyrs’ Square and the King Gate. Rs380 million has been sanctioned for the expansion of a road in Kohat.