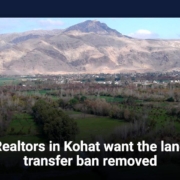 Kohat realtors want the land transfer ban to be abolished. The property dealers’ association has asked the deputy commissioner to lift the ban on land transfers and let the tehsil municipal administration register housing societies with less than 160 kanals of land.

In a meeting with deputy commissioner Roshan Mehsud the other day, association president Pir Kamran Shah and other members made the request, according to a statement released here on Tuesday.

Mr. Shah told the deputy commissioner that people were upset about the ban on land transfers. He said that letting people sell land would bring in a lot of money for the government.

WORKSHOP: People who spoke at a workshop here on Tuesday asked for FIRs to be filed quickly so that people who are involved in human trafficking can be punished quickly.

The police and the courts put on the workshop to tell the people who came about how quickly criminals are punished under the Prevention of Trafficking in Persons Act, 2018.

They stressed how important it was for everyone involved to follow the letter and spirit of the Act.

SP Investigations and the regional director of prosecution told the participants about the Act’s new way of being put into action and the new punishments.

They said that if the Act was put into effect properly, it would get rid of people with bad intentions.

They stressed that it was everyone’s job to make sure that law and justice were the most important things.