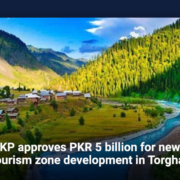 Mansehra: According to news reported on August 8, the Khyber Pakhtunkhwa (KP) government has approved PKR 5 billion in funding for the creation of a new tourism zone in the Torghar district.

Speaking at the opening of Mansari-Mudari Road, District Development Advisory Committee Chairman Laiq Mohammad Khan noted that the government intends to develop the Bartoni area of Torghar district, which will increase tourism in the area. The project will feature highways, rest stops, and other infrastructure, according to the specifics.

The MPA also mentioned monies for the development of hospitals and schools in remote locations. He added that funding for the building of roads and schools was being allocated for the first time since the area received the designation of settled district.