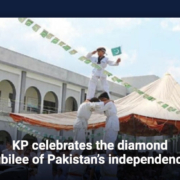 PESHAWAR: Khyber Pakhtunkhwa celebrated Pakistan’s diamond jubilee on Sunday with the same traditional zeal and excitement as the rest of the country.

On the country’s 75th Independence Day, ceremonies were held in both the provincial capital and the district headquarters.

The day started with a 21-gun salute and prayers for Pakistan’s safety and growth in the provincial capital.

Peshawar’s Independence Day celebrations began on the night of August 13 and went on until the early hours of August 15. But the noise of kids and teens using plastic horns and bikes without silencers on the city streets ruined the party. Children were also seen at the ceremonies with paint on their faces. They were there with their parents. Many of them wore white and green clothes, which are the colours of the Pakistani flag.

Most government and private buildings were lit up in the provincial capital, and all of the public parks were packed to the brim with happy Peshawaites celebrating Independence Day.

The directorate of sports put on a car show at Qayyum Sports Complex, then music and dance performances, a ceremony to honor national sports heroes, fireworks, and a tonga and rickshaw decorating show.

Mushtaq Ahmed Ghani, the acting governor of Khyber Pakhtunkhwa, said in a statement that independence was a gift from God and that the country should honor it. Mr. Ghani, who is the Speaker of the KP Assembly, spoke about the heroes of the country. “We decide on this day that we will work together to face the challenges.”

At a ceremony for Independence Day, the Chief Justice of the Peshawar High Court, Justice Qaiser Rashid Khan, wished the legal community and the whole country well.

He said that Pakistan should work hard to become a strong and growing country. During the event, he also raised the national flag. Principal officers, the district and sessions judge for Peshawar, the dean of the KP Judicial Academy, the executive chairman of the KP Bar Council, and other people were there.

To celebrate the 75th anniversary of the country’s independence, the superintendent of the district jail in Mansehra put on a games and folk dance competition for the prisoners. The happy prisoners chanted slogans in favour of Pakistan and cheered on the players.

In the Mansehra, Torghar, Upper Kohistan, Lower Kohistan, and Kolai-Palas districts of the Hazara division, there were also ceremonies to raise the flag, seminars, and rallies.

On the 75th Independence Day, there were different events and cake-cutting ceremonies in Lower Dir. Together with the Timergara Campus of Abdul Wali Khan University in Mardan, the district administration put on a colourful event that was attended by school kids, college students, teachers, and people from all walks of life.

On the main campus of the University of Malakand, there were also Independence Day celebrations.

Haripur has ceremonies to raise the flag.

Celebrations for the diamond jubilee were held at the district headquarters, the tehsil municipal offices in Khanpur and Ghazi, the Tarbela dam, the office of the district health officer, and different schools.

People from the district administration, the education department, the legal system, and civil society all took part in the events.

Students from both public and private schools performed songs, tableaus, speeches, and PT shows about their country. There was also a marathon race and a number of cultural events.

The main Independence Day event in Kohat took place at the District Hall of the KDA Township, where MPA Ziaullah Bangash, district administration officials, and army officers prayed for peace and prosperity in the country.

Children sang national songs and put on tableaus, which got them a lot of applause.

In Orakzai, the day was marked by the education department enrolling 100 boys and girls in government primary schools.

Hundreds of tribesmen also marched five kilometres to let people know that they should go to school.

The sports field in the tribal district was also the site of a two-day cultural and arms show for Pakistan Day.

The diamond jubilee of the motherland was celebrated with great enthusiasm in Swabi.

Faculty, other staff, and students from the Ghulam Ishaq Khan Institute of Engineering Sciences and Technology attended an event.

Independence Day events were held in Lakki Marwat by the district administration, the army, the education department, and the Boy Scouts Association.

A group of police officers gave the national flag a salute, and the national anthem was also played. After the ceremony to raise the flag, students and scouts gave speeches and sang national songs.

At a ceremony in the sports complex in Bannu, the national flag was raised by the deputy commissioner, Aun Haidar Gondal. A group of police officers gave a salute to the country’s flag.

On the same day, Mr. Gondal also started a campaign to plant trees.