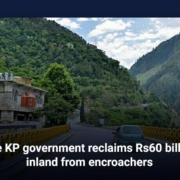 Hangu district is at the top of the list, with 1143 Kanals of recovered land valued at Rs238 million. The board and competent authorities retrieved 668 Kanals of land in the provincial capital, with a market worth of Rs39 billion.

Charsadda district has recovered 326 Kanals worth Rs3.9 billion, 71 Kanals in Lakki Marwat, 67 kanals in Buner, 66 Kanals in Bannu, 34 Kanals in Haripur, and 33 kanals in Manshera. According to a Board of Revenue representative, land records are being digitised.

Syed Zafar Ali Shah, senior member of the Board of Revenue (SMBR), told Dawn that the land had been recovered as part of the ongoing crackdown on land grabbers and encroachers.

Apart from the anti-encroachment campaign, he stated that his department was also working on the digitization of state land records throughout the province. “We are compiling a database of all public lands in the province,” he explained.

Mr Shah stated that the Pakistan Survey is carrying out the project. He stated that his agency had provided the Survey of Pakistan with all data about state lands for digitization.

According to the SMBR, the records would assist reduce land grabbing and encroachment on government lands because they would be easier to obtain than the current challenging and time-consuming manual examination approach. He stated that the details of 1,300 mouzas had been digitised over the last year as part of the computerization of land records effort.

Mr Shah stated that the project, which began in 2013, would digitise approximately 3,500 mouzas land records in the province’s 19 districts.

Read more with EL news : The Hakla-DI Khan motorway will remain open for traffic until October

He stated, however, that had digitized 350 mouzas land records had been digitised in less than four years. In addition, the SMBR stated that the initiative has gained momentum in the recent year, with the digitization of land records in a total of 1,300 mouzas completed in the last year and 1,200 others scheduled to be completed by December this year.

He stated that digitizing land records was a significant undertaking, and such initiatives frequently encountered intrinsic systemic resistance. “We are also pursuing resolution through the use of geospatial information systems in the combined tribal districts. Currently, construction is underway in seven of the region’s tehsils,” he explained. The KP government reclaims Rs60 billion from encroachers in the interior. The KP government recovers Rs60 billion from encroachers in the interior.

Mr. Shah stated that two tehsils were located in Kurram, Bajaur, Khyber, and the formerly frontier territories. His department has also established 26 service delivery centers in various province sections with easy access to fard and property transfer facilities. According to the SMBR, they would construct those centers at the tehsil level throughout the province. The KP government claims Rs60 billion from encroachers in the interior.