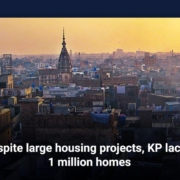 During question time, housing minister Dr Amjad Ali Khan stated that the province’s housing needs ranged between 700,000 to 900,000. “Despite many projects, there remains a huge lack of housing units in the province,” he stated in response to MMA MPA Inayatullah Khan.

Agri-land for housing plans in the province? His agency has been tasked with identifying empty land and sharing its details with the deputy commissioners appointed to the combined tribal districts.

Dr Amjad said five major housing initiatives would be completed by the end of the year. He said they finished 95% of the civil work at the Jalozai housing complex in Nowshera.

Five housing projects to be finished by year’s end

The minister said the department had paid Wapda Rs1 billion for grid stations to electrify the project. Construction was nearing completion on high-rise apartments in Hayatabad, Havelian Township Abbottabad, Kohat, and Peshawar. “Three housing developments are finished, and ten are in the works,” he stated.

On the outskirts of Peshawar, Dr Amjad stated, the federal ministry of housing and works has bought 10,000 kanals of land for the Naya Pakistan Housing Program. He stated that the ministry has already sent out offer letters to scheme winners. Despite massive housing projects, KP lacks 1 million dwellings.

It will be settled very shortly, added the minister. A comprehensive master plan for new housing complexes should be developed by the provincial administration, according to MPA Inayatullah.

Read more with EL news : The PU budget has been approved at Rs12.6 billion

He suggested the government prohibit home developments on farmland. A long illness claimed the life of legendary journalist Rahimullah Yousafzai.

During the debate on hiring non-local nurses to the newly combined tribal districts, Baluchistan Awami Party member Bilawal Afridi caused a stir. In Oct 2020, the directorate posted 481 male and female nursing positions for tribal regions. Just 29 persons from the combined districts were recruited, while 452 came from Swat, Dir and Chitral.

The chair told the protesting MPs to discuss the motion in detail once the minister clarified the issue. Both MPAs ignored this and proceeded to protest. “What these fools are doing,” irritated Speaker Ghani, referring to the protesting lawmakers. He even threatened MPA Nisar with expulsion from the house if he didn’t change his actions. It was adjourned without finishing the plan. Despite massive housing projects, KP lacks 1 million dwellings.