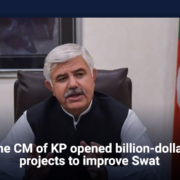 The CM of KP opened billion-dollar projects to improve Swat. News reports say that Mehmood Khan, the Chief Minister of Khyber Pakhtunkhwa (KP), opened billion-dollar development projects in the hilly area of Sawat on Saturday (May 28). Among the projects are schools, mosques, and housing complexes for staff and putting solar panels on schools and mosques.

Staff Colony, which would cost PKR 4 billion, would be where people who worked on the Kalam-Gabral Hydropower Project would live. He announced a PKR 1 billion project for Kalam and PKR 36 billion for a power plant, on top of the projects already underway. Mehmood said that the government would put more money into developing tourism in the area, which is important for creating jobs in the area. He said that the administration would talk to the people in the area before starting any new projects.