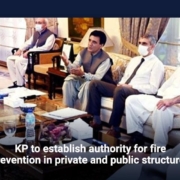 KP to establish authority for fire prevention in private and public structures. According to information reported in the national dailies on August 8, the Khyber Pakhtunkhwa (KP) government intends to create a burn accident prevention authority to guarantee the construction of suitable firefighting equipment and people safety in private and public structures.

According to the information, the government is in the process of drafting laws that will establish an authority and make it essential for building owners to install fire extinguishers and make adequate preparations for people’s safe evacuation in the event of a fire disaster. The Provincial Assembly and the Health Department have held three sessions and are eager to enact the law for public safety, according to the Director of the Burns and Plastic Surgery Center at Hayatabad Medical Complex. The director continued by saying that the authorities would deal with every aspect of fire outbursts. He continued by saying that, in accordance with the law, owners of plazas, marketplaces, and both private and public buildings will be required to install smoke detectors and provide people with safe exits in the event of a fire.