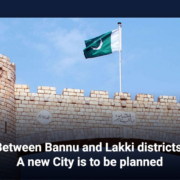 It will be called “Banni Gul City,” and work on the project will start soon.

Over 1.6 million people live in Bannu, and they have a lot of problems with their homes and other things.

Government: “To deal with these problems, the government has prepared a feasibility report for the new Banni Gul City on 10,000 kanals of land in Ghoriwala, near the CPEC route and the motorway,” he said.

In the new city, he said the government would provide housing and other services for the people who live there. These services would include health and education, sports and recreation, uninterrupted power, and gas. It was the Urban Areas Development Authority, not Mr. Zubair, who was in charge of it, said Mr. Zubair.