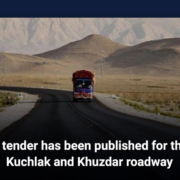 The chief minister stated on Twitter that the road between Kuchlak and Khuzdar was critical. A dual carriageway along this route had been a long-standing demand of the Baluchistan people.

He stated that numerous fatalities have occurred as a result of frequent accidents on the Quetta-Karachi motorway.

Read more with EL news : The SHC has requested a list of all officials charged by the NAB

In another message, CM Alyani stated that the administration was working to improve the province’s educational standards, one of which was constructing a girls’ college in Nawan Killi.

In response to the second All Pakistan Chief Minister, Baluchistan Diamond Jubilee Football Tournament, held in Quetta, he stated that the government had organized numerous similar events over the last three years to provide opportunities to Baluchistan’s sportsmen.

Meanwhile, Dr. Munir Baloch, president of the Pakistan Tehreek-i-Baluchistan Insaf’s chapter, commended the government for announcing the tender for the construction of the Kuchlak-Khuzdar dual carriageway. A tender has been published for the Kuchlak and Khuzdar roadway.
He was noting that Prime Minister Imran Khan had kept another promise he made to the Baluchistan people.

“In the first phase, a tender has been published to convert the national highway from Kuchlak to Khuzdar to a dual carriageway,” he explained, adding that the dual carriageway would alleviate transport concerns on this route.

A tender has been issued for the construction of the Kuchlak-Khuzdar highway.