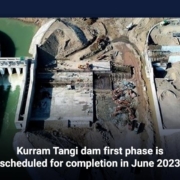 This was mentioned by retired Lt Gen Muzammil Hussain, head of the Water and Power Development Authority (Wapda), during his visit to the project site. He asked the project’s management to step up efforts to complete the task on time and at the specified standard of work.

Read more with EL news : Khayaban-e-Iqbal Road will be connected to Margalla Road via 2 interchanges: CDA

He emphasised the project’s irrigation and hydropower generation benefits, stating that it will assist in achieving sustainable development through irrigated agriculture and low-cost hydropower generation, while creating job opportunities and alleviating poverty in the distant and backward area. Gen Hussain stated that water security is a critical component of human progress worldwide, which is why Wapda is implementing over a dozen projects to maximise the country’s water resources, according to an official release.

The Wapda chairman had already reviewed several aspects of the project, including the weir (dam), irrigation system, and power houses. The project management briefed him on the project’s progress through Stage I.