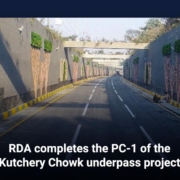 Rawalpindi Development Authority (RDA) has prepared a preliminary feasibility study (PC-I) for remodelling Kutchery Chowk and Defence Chowk. It has submitted it to the Planning and Development Board for approval.

Read more with EL news : The CDA has ordered a major overhaul of Sector E-11

According to a top RDA official, the government earmarked Rs300 million each for Kutchery Chowk and Defence Chowk, located in front of Shifa Eye Hospital and Fauji Foundation Hospital.

He explained that if the RDA began both projects concurrently, it would create traffic congestion. Therefore they chose to begin with it and subsequently with Defence Chowk.

Concerning the project’s PC-I, he stated that the provincial government had forwarded it to the communication and worked department for review. After it received a green light, the Planning and Development Board would issue formal permission.

He stated the traffic congestion had risen on the major plaza and the enormous lineups are apparent on all the roadways. According to him, the proposal calls for an underpass to connect The Mall and Airport Road to The Mall and Jhelum Road.

However, he stated that the RDA desired to construct a flyover but was denied permission by garrison authorities due to security concerns.

When contacted, RDA spokesman Mohammad Irfan stated that they are now engaged in two major projects: Kutchery Chowk and Defence Chowk. However, he stated that work on the projects would begin following the completion of Ammar Chowk, as per the Punjab government’s directive to reduce traffic congestion in the garrison city’s key squares.