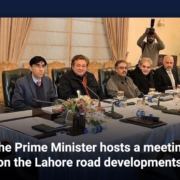 Mr. Prime Minister stated during a meeting aimed at alleviating the city of Lahore’s vehicular traffic congestion. He stated that Lahore has enormous revenue potential and emphasized the importance of utilizing prime urban lands that are currently underutilized and constitute “dead capital.” He proposed that additional urban development projects in Lahore be operated through public-private partnerships on the model of Ravi Urban Development and the Central Business District.

Read more with EL news : The CDA board has accepted the layout plan for I-14 Markaz

They elevated Expressway from Main Boulevard Gulberg to M2 Motorway,” according to the briefing. He also stated that the Punjab government had previously invested Rs5 billion in the project, which is estimated to cost Rs61 billion and take 15 months to complete. This project will reduce travel time by an average of 30 minutes along the route and will have a daily capacity of 73,000 vehicles. Mr. Shaukat Tarin, Mr. Shafqat Mehmood, Mr. Asad Umar, Mr. Fawad Chaudhry, and Dr. Shahbaz Gill are the federal ministers.