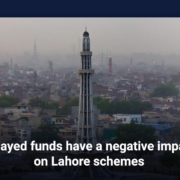 The Punjab government may be unable to complete various development schemes under the Annual Development Program (ADP). By December this year – the first half of the current fiscal year 2021-22). Due to a lack of funds allocated in this direction.

Though the finance department has partially fund some new and ongoing schemes carried forward from the previous fiscal year 2020-21. They may not be complete on time due to the delay in releasing the remaining funds.

“It is truly bizarre that the government has yet to release the funds allocated for the schemes. Even though the relevant departments/project executing agencies have already issued work orders. They have issued work orders to contractors following the necessary legal procedures (floating tenders, for example),” laments an official source.

“Most projects completes in three months. But how can these projects, which mostly entail road, street, and other infrastructure restoration, be accomplished without enough funding?”

Similarly, the official stated that the government has partially funded several schemes completed in as little as one to three months.

“We are curious as to why the government is delaying the full release of funds to schemes ranging from Rs10 to Rs200 million. If this practice continues, no scheme, even the smallest, will be completed on time.” He said, urging the government to fully release the funds allocated for the timely launch and completion of development projects in various parts of Lahore and other major cities.

According to an official letter, the funds have not yet been released for the following schemes:

Rs40 million each for rehabilitation of roads and streets (Johar Shadi Hall to Bhalla Chowk), Madina Road-blocks 2, 3, Wafaqi Colony Chowk to Awan Chowk); construction of the metal road (Al-Karim Chowk Township to Muslim Chowk); construction of the metal road (Muslim Chowk to Chandni Chowk, Township The ADP assigns the General Serial Numbers 3021 to 3035, 3061 to 3070, 3061 to 3070.

According to a senior LDA official, funds for various ADP-assigns schemes is partially distributing in them. “There should be a system for evaluating whether a scheme is fully or partially funded. If they can complete a scheme (large or small)within a few months, the government should release funds in full rather than in installments,” the official, who requested anonymity, stated.

The Punjab government’s 2021-22 budget, by the PTI, is primarily focusing on implementing the Rs560 billion historic ADP. They are utilizing all funds during this fiscal year. The government previously claimed to have released Rs144 billion to various departments on the first day (July 1, 2021) of the new fiscal year-2021-22. It ensure that all ongoing schemes completes on time. Similarly, the government allocated Rs100 billion under the ADP. To launch and complete new development projects throughout the province through the district development package. Separately, Rs30 billion allocated to Lahore for various mega projects.

“I believe the government must prioritize this issue (relating to the non-release or partial release of funds for the schemes). Or else several schemes (new and ongoing) will face significant delays. Additionally, it will bring a bad name to the government. It is already facing widespread criticism over skyrocketing prices, inflation, and other issues,” he warned.

The secretary to the finance department and the special secretary were unavailable for comment.