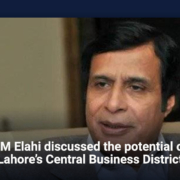 According to the sources, the CBD wants to provide “a tailored and innovative real estate supply to contribute to national development,” they told the chief minister. He was also informed that the project has attracted both domestic and foreign investors and offers a sizable investment scope. The initiative was hailed as a game-changer that will alter the province’s future by attracting investment, producing income, and reducing unemployment. CM Chaudhry Parvez Elahi requested during the meeting that the relevant authorities create a thorough foolproof monitoring system for all public relief programs in the province, which will be personally overseen by him.