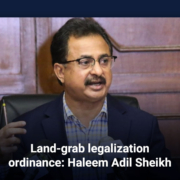 He told a press conference at the Sindh Assembly building that approximately 3.9 million acres of state land were illegally occupied in the province and that the PPP government intended to legalise all encroachments and counterfeit documentation on ostensibly “humanitarian grounds” in light of the situation created by the judiciary’s order to demolish Nasla Tower and remove encroachments along the Gujjar Nullah.

“If the ordinance is intended to compensate residents of Nasla Tower, Gujjar Nullah, or Orangi Nullah, as well as those who live in katchi abadis, this must be included in the draught ordinance,” he remarked.

He accused the Sindh government of having ulterior motives, stating that “it is clear from the planned commission’s membership that it would be headed by a retired judge and would likely include Murtaza Wahab and a representative of the Association of Builders and Developers (Abad)”. He stated that stakeholders and parliamentary parties should be consulted on legislation in accordance with democratic standards.

He also proposed that the planned commission be notified by Pakistan’s top judge following extensive dialogue with the opposition. The commission, he contended, must be chaired by a serving Supreme Court judge, as the Supreme Court was now hearing a case involving illegal construction and land grabbing in Sindh.

“If the opposition’s reservations are not eliminated, we intend to challenge the ordinance in court, as this draught ordinance will pit the Sindh Assembly, political system, executive, and governor of Sindh against the courts,” Mr Sheikh continued.

He also objected to the Sindh Local Government Amendment Bill 2021, describing it as a clear violation of the Pakistani Constitution and the spirit of devolution of powers to the grassroots, and announcing that he would fight the bill in higher courts as well.

According to him, Articles 7, 8, 32, and 140-A of the Constitution call for the empowerment of local government institutions and the transfer of education, health, civic services, and other fundamental tasks and responsibilities to the third tier of governance.

“On the contrary, local government bodies are stripped of all their fundamental functions and obligations, leaving them with simply the responsibility of managing public restrooms,” he continued.

“The amendment bill would place primary healthcare under the control of the Sindh government, including Sobhraj Hospital and Abbasi Shaheed Hospital, the Leprosy Centre, the Sarfraz Rafiqui Shagheed Centre, the Karachi Medical and Dental College, the Infectious Disease Department, and a number of educational institutions.”