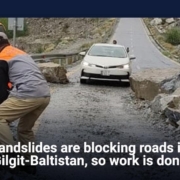 ISLAMABAD, GILGIT, and PESHAWAR: Multiple landslides caused by rain have blocked a major road in the upper parts of the country between Gilgit and Skardu. The National Disaster Management Authority (NDMA) has warned the relevant departments to stay on the lookout after a series of heavy rains from Monday to Wednesday, which may cause more landslides and flooding in cities.

Also on Monday, the upper parts of Khyber Pakhtunkhwa continued to get hit by rain.

The latest forecast from the Pakistan Meteorological Department says that the heavy rain, wind, and thundershowers that started on Monday in the upper and central parts of the country will last until Wednesday. All provincial departments, the National Highway Authority, the Frontier Works Organization, and other organizations have been told to stay alert and take precautions.

The new rain could cause landslides in areas like Khyber Pakhtunkhwa, Galiyat, Kashmir, and Gilgit-Baltistan that are prone to them. It could also cause flash floods in the local nullahs in Rawalpindi/Islamabad, KP, Punjab, Kashmir, GB, and northeast Baluchistan, where windstorms could damage old buildings.

The Met Office also thought the monsoon would start at the end of June.

It is likely to rain more than usual during the monsoon in Punjab and Sindh and a little more than usual in the rest of the country. As a result, the first part of the monsoon, from July 1 to the middle of August, is expected to be wetter than the last part (mid-Aug to end-Sept).

In the last 24 hours, Skardu’s Deputy Commissioner Kareem Dad Chughtai has been tweeting pictures of the Jaglot-Skardu road being blocked at multiple points by landslides. On Monday, he said that a 160-kilometer stretch of road that connected Gilgit and Skardu and was a major link to the Karakoram Highway was blocked at Chamachu, Maloppa, Tormik, and other places in Skardu because of heavy rains.

He also said that the Frontier Works Organization (FWO) was working to clear the road, and he told tourists not to use the route until it was clear. In addition, he told people not to travel at night until Thursday and not to travel during the day when it was raining.

Mr. Chughtai also tweeted to tourists coming to the area for their summer vacations that heavy rains were still falling in the Deosai plains and that tourists shouldn’t travel from Skardu to Astore and back during rains. “No one can go through Deosai at night tonight.”

At the same time, scattered rain across Great Britain lowered the mercury, and snow fell in hilly areas. In the Ghanche district, flooding caused by rain also hurt homes and roads. After the Jaglot-Skardu road was blocked and the weather suddenly changed, many tourists in the area had trouble.

The Met Office says that it will rain and thunder in GB and other parts of the country.

Earlier on Friday, the National Disaster Management Authority (NDMA) warned its GB chapter and other district disaster management authorities to stay alert because of the weather and the possibility of a glacial lake outburst flood (GLOF).

On the other hand, the rain kept falling on and off in the upper parts of Khyber Pakhtunkhwa on Monday, but officials said no one was hurt.

The Provincial Disaster Management Authority (PDMA) said that the flow of rivers was normal. However, a GLOF was reported in the remote Ishperu Gol area of Terich village in Upper Chitral, where it damaged a 50kV micro-hydel power station.

The PDMA also said that in the last 24 hours, land slides had blocked the Kalkot Daba Road in Upper Dir and the Swat-Shangal main road in the Machar area of Alpuri in the Shangla district, but the streets were later cleared.

The Met Office in Lahore said on Monday night that the gale reached speeds of up to 55 knots and brought winds of more than 100 km/h to the area around the airport.